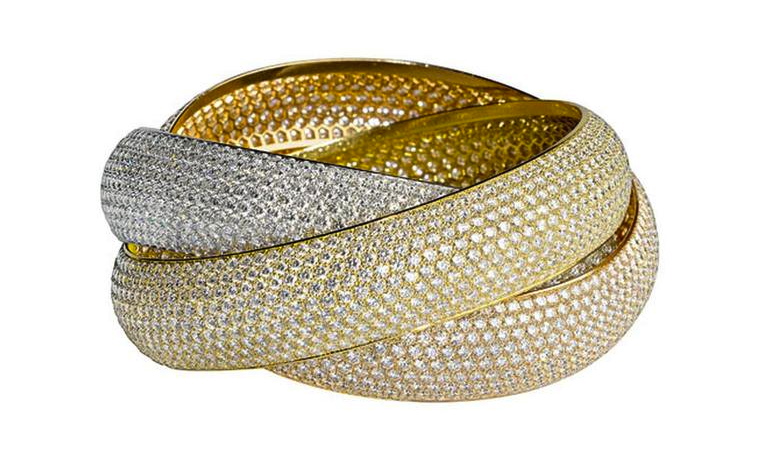 Cartier and Jean Cocteau in Milly-la-Forêt

Cartier’s Trinity ring has inspired a collection of intertwined jewels and remained one of the classic jewellery designs of all time, launched in 1942.

It may be almost a century old, but the Trinity ring remains one of Cartier’s most iconic creations. A cult classic comprised of three bands of grey, yellow and pink gold, forever joined in a tactile embrace, the ring has, over the decades, spawned a whole collection of Cartier Trinity jewels, all of which incorporate the same intertwined bands of gold.

Designed by Louis Cartier in 1924 at the request of the French artist, novelist, poet and filmmaker Jean Cocteau, the design looks no less contemporary today, which makes it even more remarkable.  In the 1920s, with the Art Deco era in full swing and Flapper style at its peak, Cartier was famous for its colourful and exotic creations. To create something like the Trinity ring – pared back to the basics of pure design, with no embellishments – showed great bravura.

Milly: an environment in tune with the poet

A genuine rustic retreat, Jean Cocteau’s house in Milly-la-Forêt is a reflection of the poet’s world. It was his ideal “backdrop”, as he once stated.

Purchased by the poet in 1947, the house, with its sumptuous interior decoration and bucolic garden, will open its doors to the public in Spring 2010. This initiative was launched by Pierre Bergé, who inherited the moral rights of the entire works of Jean Cocteau, and is supported by Cartier.

Jean Cocteau, who was a great collector of objets d’art, created a 1950s style decor with the help of the famous interior designer Madeleine Castaing. The walls of his study, adorned with the reverse side of a panther fabric, symbolise extravagant fantasy and idiosyncratic refinement.

Cartier and Jean Cocteau: the story of a creative bond

Cartier’s involvement perpetuates the friendship that formed between the jeweller and the poet, who unreservedly adopted the Trinity ring following its creation in 1924. It was once again to Cartier that Cocteau turned for the provision of the diamonds that would form the tears on the face of the Beauty, played by Josette Day, in his film, La Belle et la Bête.

Their relationship of trust culminated in 1955, when Jean Cocteau was accepted into the Académie Française and ordered his “immortals” sword from Cartier. Following a mutually creative conversation between the future Academician and the jeweller, the sword was designed by Cocteau himself and produced by the Cartier workshops. The Trinity rings: treasured links between a poet and a jeweller

In harmony with Cocteau’s creative world, the Trinity Sauvage ring condenses the Cartier codes and reconstitutes them in a unique and powerful creation. Displaying a cross-bred fusion of styles, it unites two great Cartier icons for the very first time – the panther and the Trinity ring – and exhibits a confident blend of pink gold, diamonds and yellow gold dotted with splashes of black lacquer, in reference to the panther decor in Jean Cocteau’s study.

Cartier has created another tribute to the inspired Ambassador of the Trinity ring, who admired it so much he even wore two on his little finger: the Trinity La Belle ring featuring six bands studded with a diamond star, a jeweller’s echo of the poet’s own famous signature.

Knowing How to Identify High-Quality Jewellery