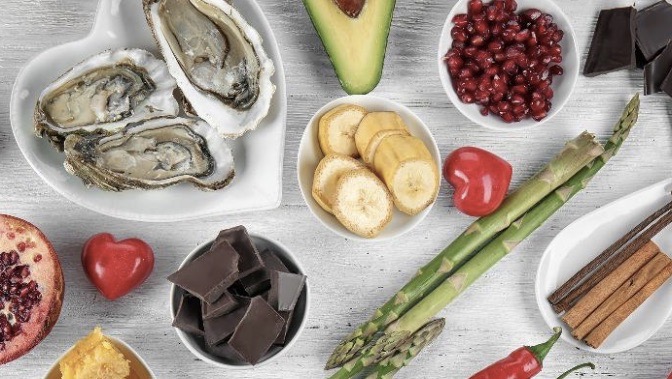 There’s a reason why you often see a woman eating a square of chocolate seductively in an advert, it’s because chocolate has long been linked to lovemaking, and the reason for this is because it is a notorious natural aphrodisiac. As well as being incredibly tasty, chocolate may have scientific benefits for your libido. Research suggests that chocolate helps men and women alike, acting as a natural Viagra. Chocolate may also assist your body in releasing those feel-good hormones such as serotonin and dopamine which may help to boost your sex drive. Aim for chocolate that contains at least 75% cocoa for the most benefits.

Certain mushrooms may also help to increase your libido and boost your sexual wellness. The red reishi mushroom has long been used to help with sexual function, naturally increasing libido. The reishi mushroom has aphrodisiac properties and works by increasing both male and female libido as well as enhancing the body’s overall function and performance.

Staying hydrated is key to healthy sex life. It’s not necessarily noted as an aphrodisiac, but when we drink plenty of water and are well hydrated it is much more likely that our libido is boosted. When you’re hydrated your body functions more optimally and you may notice that your energy levels are boosted during sex, which is a bonus and may also help with certain sexual positions. Eight glasses of water a day is the recommended amount. This should also contribute to you feeling mentally and physically alert which may also help to promote a healthy libido.

Asparagus, which is a tasty nutritionally dense vegetable to include in your diet, is also an aphrodisiac. Asparagus is rich in vitamin E which may increase blood and oxygen levels to the genitals. It is also full of potassium, and this could contribute to optimal sex-hormone production.

Chilli peppers hold a chemical compound called Capsaicin and are the reason why chillies are spicy but did you know they can also help the body to release natural feel-good endorphins?

Capsaicin, as well as facilitating those feel-good feelings, may also improve blood flow, which in turn helps to increase sex drive and potentially increase your libido.

Seafood notorious for boosting libido is oysters. For some time, they have been known as a key player in the aphrodisiac realm. Oysters are packed full of zinc which is key for testosterone production and promoting healthy sperm. Oysters are also known to boost the feel-good hormone dopamine which may increase the libido in both men and women.

Strawberries are often marketed as a sensual food, dipped in chocolate, and served with champagne. Strawberries contain powerful antioxidants as well as many other vitamins, minerals, and nutrients. All these great attributes combined suggest that strawberries may also help to support a healthy sex life.

Always speak to your GP if you are experiencing problems with your libido or ED. Medications such as Sildenafil tablets and Tadalafil tablets are the most common treatment options for ED, according to pharmacist Abbas Kanani of Chemist Click.

5 natural sunburn remedies you can find in your fridge

All You Need To Know About Facial Massage